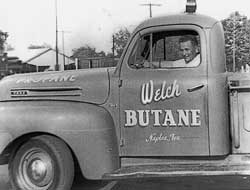 R. J. Welch, affectionately called “Mr. Rube” by his business associates and friends, was the founder of Welch Butane. Mr. Rube established Welch Butane in downtown Naples, Texas in early November 1949, with one bobtail truck and a “Big Chief Tablet and a #2 pencil.” He quickly became known and respected by his peers and area citizens for his self-made business expertise and wisdom.

When Mr. Rube retired January 1, 1968, the business was passed on to his son, Hershel G. Welch. Over the years, Welch Butane acquired other Propane gas dealerships, which were consolidated into the overall operations. In 1984, Welch Butane became a registered corporation. Operating under its own corporate charter, the company was renamed “WelchGas”, dropping the “Butane” term and moving to a more modern trade name. WelchGas has grown to become one of the largest independent Propane marketers in the Northeast Texas area.

The late 1970s and early 1980s brought about the addition of retail locations in Daingerfield and Bogata. In 1987, Hershel’s son Wes joined the family operation and they soon opened another retail location. On November 1, 1987, the retail office in Mt. Pleasant was opened and then relocated to its present site in October 2001.

The Welch family operated a propane transport company – Welch Energy – from 1977 until 2007. The transport company supplied propane to all WelchGas locations over the years, as well as to other surrounding propane dealers in the Northeast Texas area.

On September 1, 2007, Wes Welch acquired ownership of WelchGas. The company now operates four retail locations. The home office is located in Mt. Pleasant. The Daingerfield branch office has been servicing customers since the early 1980s. Market conditions continued to pave the way for more expansion, and in August 2012, WelchGas opened a branch in Texarkana under the name Texarkana Propane. In May of 2015, a fourth location was established in Atlanta, Texas. WelchGas now provides Propane Service to 10 counties in the Northeast Texas region – Bowie, Cass, Morris, Marion, Harrison, Upshur, Camp, Titus, Franklin and Red River. The company provides a wide variety of services in the agricultural, commercial, and residential propane market.

WelchGas has been recognized numerous times for innovative marketing and sales programs. The company has also received awards for promoting propane safety and training. Safety remains a top priority for customers and employees as well. All WelchGas employees attend safety training on a regular basis.

Known throughout Texas and the nation for their strong beliefs and efforts in Propane Marketing, WelchGas continues the tradition of a strong campaign focused on “Customer Service & Safety” and building strong relationships with their customers.